Members of ERUF attended the much publicised Rail Summit at Portcullis House yesterday.  The summit was arranged by East Anglian MPs to emphasise the need the major improvements to rail services in the region.

Network Rail came in for much criticism and indeed the start of the meeting was delayed due to attendees being held up by timely signalling problems at Stratford.  Network Rail admitted that it is disappointed with its own performance and failure to properly maintain the infrastructure in the region.  However they stated that the London - Norwich line had received relatively little new funding compared to other lines in the country.

It was agreed by all that investment in the Essex infrastructure would be of benefit to all along the Norwich line.  It was also agreed that the train fleet had to be radically overhauled and / or replaced. 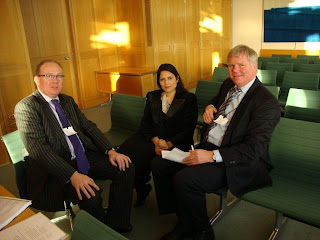 The Essex Rail Users Federation exists to represent the interests of rail users in Essex, predominately along the Great Eastern Mainline and branches. It comprises individual Rail User Groups from stations along the line.
Please note that ERUF is not responsible for the content of other sites linked to this page.
To leave a comment on articles on this site you will need to have a Blogger account. To create one of these, please click here